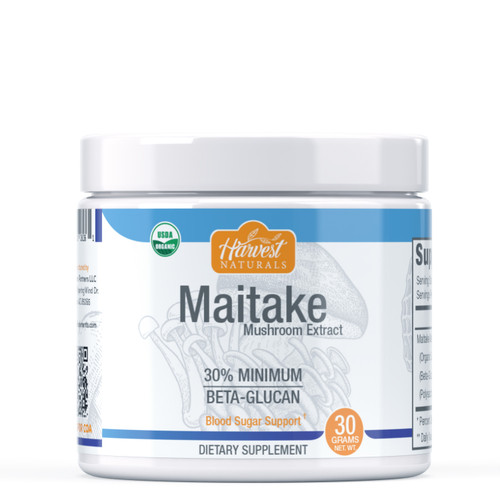 What is Maitake Mushroom Extract Powder?
Grifola frondosa, commonly referred to as Maitake, is a polypore mushroom that grows in clusters at the base of oak trees [1]. The fungus is known among English speakers as hen of the woods, hen-of-the-woods, ram's head, and sheep's head. The mushroom can be between late summer to early autumn. In both the United States' supplement market and in Asian grocery stores, the fungus is known by its Japanese name Maitake or dancing mushroom. Throughout Italian American communities of northeastern United States, it is commonly referred to as the signorina mushroom, translating to "miss mushroom." Grifola frondosa should not be confused with Laetiporus sulphureus, another edible bracket fungus that is often referred to as "chicken of the woods" or "sulfur shelf." A distinct way of identifying the two polypores is by noting their color. Maitake is grey-brown in color, whereas Laetiporus sulphureus is orange and yellow. As with all polypores, the fruiting body becomes inedible when older, as it becomes too tough to eat.
Like the sulfur shelf mushroom, G. frondosa is a perennial fungus that often reoccurs in the same location for several years in succession. It occurs most commonly in the northeastern regions of the United States and has been found growing as far west as Idaho. Grifola frondosa grows from an underground tuber-like structure known as a sclerotium, about the size of a potato. The growth cycle of the mushroom is still consistent with other mushrooms in that its spores germinate, and the mycelium takes root in the body of trees and begins the process of growing. When the growth occurs, the fruiting body will start to form. The fruiting body may grow as large as 100 cm and is a cluster consisting of multiple grayish-brown caps. These caps are often curled or spoon-shaped and possess wavy margins 2–7 cm wide. The appearance of the caps is similar to the feathers of chickens. Hence its name, "Hen of the Woods." The underside of each cap holds one to three pores per millimeter, with the tubes rarely deeper than 3 mm. The milky-white stripe or stalk has a branch-like structure and hardens as the mushroom ages. In Japan, Grifola frondosa can grow to more than 100 lb (45 kg), bestowing the giant mushroom the title "king of mushrooms." Maitake is one of many popular culinary mushrooms used in Japanese cuisine. Other popular mushrooms used in Japan's culinary arts are shimeji, shiitake, and enoki.

How Does Maitake Mushroom Powder Work?
Maitake is rich in several vitamins such as copper, potassium, vitamins B and C, and beta-glucans. Copper is an essential vitamin because when it pairs up with the mineral iron, it creates red blood cells. Copper also keeps blood vessels, bones, and nerves healthy while also boosting immune function. Potassium, a mineral in the body, is critical for regulating fluids, muscle contractions, and nerve signals. Vitamin B helps to support well-being, cell metabolism, as well as brain function. Ascorbic acid or vitamin C, an antioxidant, helps protect the body from free radicals, as well as repairing all bodily tissues. Beta-glucans are thought to provide the body with immune system support as well as lowering LDL levels or 'bad cholesterol.' Through the minerals and vitamins found in the Maitake Mushroom, there is an abundance of positive effects that it may afford to the body.

Consider This:
Try pairing our Maitake Mushroom extract with our Vitamin E Softgels for a boost to the immune system as well as cardiovascular support.

Suggested Use:
As a dietary supplement, take 1 heaping scoop (~1000 mg). Taken once daily, or as directed by a qualified health professional.

MSRP:
Now: $14.29 - $44.95
Was:
What is Wolporia Extensa Mushroom?Wolfiporia extensa is a fungus in the family Polyporaceae. It is a wood-decay fungus but has a subterranean growth habit. It is...

MSRP:
Now: $14.29 - $44.95
Was:
What is White Jelly Mushroom Extract?Tremella fuciformis is a species of fungus that produces white, frond-like, gelatinous fruiting bodies known as basidiocarps. The mushroom is widespread and...