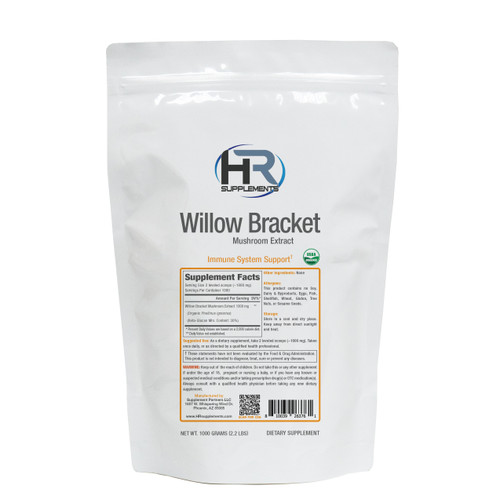 What is Willow Bracket?

Phellinus igniarius (syn. Phellinus trivialis), also known as Willow Bracket and Fire Sponge, is a fungus belonging to the Hymenochaetaceae family. As with other members of the genus Phellinus, Willow Bracket lives through saprotrophic nutrition, in which the mushroom feeds on the decaying matter of its host tree. Saprotrophic nutrition means that the fungus feeds on the lignin and cellulose of a host tree, and the residual effect is white rot. The fungus forms perennial fruiting bodies that present themselves as a woody-hard hoof or disc-shaped brackets from the bark of the infested living tree or dead log. The species of tree that Willow Bracket feeds on, as its name suggests, are often willow trees. However, it is commonly found on birch and alder and other broad-leafed trees. The top of the mushroom is covered with a dark and often cracked crust, the stipe, or stem, is present only in its infancy. Unlike most fungi, it has a hard and woody consistency and may persist for several years, building a new surface layer each year. Willow Bracket is a species of polypore, a species of bracket mushrooms that have pores underneath the fruiting body of the fungus. The bracket of the mushroom measures between 5–20 cm in diameter, in some rare cases, it can grow as full as 40 cm. The thickness of the bracket varies anywhere from 2–12 cm, and in exceptional cases to 20 cm. The fungus has small, grayish-brown pores with a density of 4-6 pores per square mm. The fungus has a tubal length of 2–7 mm. Each year, the Willo Bracket will form a new layer of tubes that are superimposed on the old layers. Unreleased mature spores often find themselves sealed in by later growth that clogs the tubes, and they appear in cross-section as brown spots. The flesh of the mushroom becomes harder with dryness and age; inversely, it softens in the presence of humidity. The smell of the fruiting body has a distinct mushroom character; the flavor of the said fruiting body is bitter. When contacted with potassium hydroxide, the flesh of the mushroom becomes dyed black.

How Does Willow Bracket Work?
Willow Bracket mushroom is commonly used in traditional Chinese medicine and possesses antioxidant and anti-inflammatory effects, which may help to regulate and reduce the damage caused by oxidative stress and inflammation. The mushroom has also been used to help assist in liver protection. The antioxidant properties of the fungus are derived from polyphenol extracts. Polyphenols are nutrients that are found in many plants and have been used for their potential health benefits. In plants, polyphenols are used to protect plants from the sun and disease.

Suggested Use:
As a dietary supplement, take 2 leveled scoops (~1000 mg). Taken once daily, or as directed by a qualified health professional.

MSRP:
Now: $329.00 - $1,490.00
Was:
About Cordyceps Extract: For centuries, cordyceps mushrooms have been implemented in eastern medicine, explicitly pertaining to Chinese medicine, for over 300 years. The fungus typically grows at an...

MSRP:
Now: $229.00 - $1,030.50
Was:
What is Wolporia Extensa Mushroom? Wolfiporia extensa is a fungus in the family Polyporaceae. It is a wood-decay fungus but has a subterranean growth habit. It is...