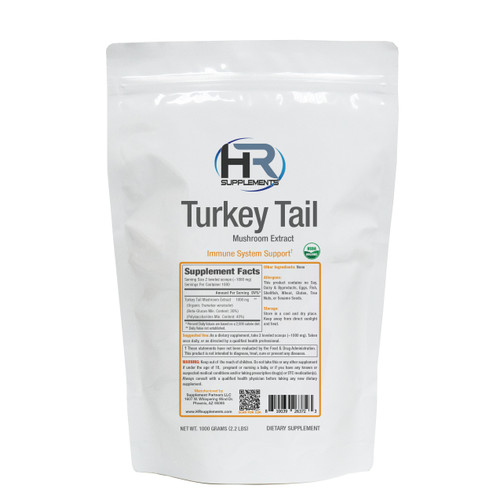 Availability:
BULK ORDERS MAY TAKE UP TO 3 - 4 DAYS PROCESSING

What is Turkey Tail Mushroom Powder?

Trametes Versicolor – also known as Coriolus Versicolor and Polyporus Versicolor – is a common polypore mushroom found throughout the world. Polypore mushrooms are a type of fungus that has large fruiting bodies with either pores or tubes on the underside of the said fruiting body. Versicolor means "of several colors," accurately describes Turkey Tail and its different colors. Turkey Tail earned its name because its shape and varying shades resemble those of a wild turkey, T. Versicolor is commonly referred to as turkey tail. The top of the cap displays concentric zones of different colors typical for that type of fungus. The fruiting body of the mushroom is 1 and 3 mm in thickness and has a leathery texture. It is not uncommon for older specimens, such as the one pictured above, to have zones with green algae growing on them, giving them a green appearance in color. Turkey Tail commonly develops in tiled layers. The cap is rust-brown or a dark-brown, and sometimes contains zones with a black hue. The mushroom's cap is flat, up to 8 x 5 x 0.5–1 cm in area. It is often triangular or round in shape, with zones of fine hairs. The pore surface is whitish to light-brown, rounded pores, and with age twisted and labyrinthine with 3-8 pores per millimeter. The principal ingredient extracted from Turkey is Polysaccharide-K (Krestin, PSK), which is a protein-bound polysaccharide isolated from the fruitbody.

How Does Turkey Tail Mushroom Powder Work?
The Turkey Tail mushroom is filled with antioxidants, compounds that help prevent damage from free radicals and oxidative stress. Damage caused by free radicals and oxidative stress can lead to inflammation. Of the many antioxidants that Turkey Tail possesses, the most important are phenols and flavonoids. Phenols and flavonoids assist in the promotion of a healthy immune system by releasing protective compounds and reducing inflammation. In addition to containing antioxidants, Turkey Tail also provides polysaccharopeptides which boosts the immune response through reducing inflammation, activating, and inhibiting certain immune cells. Beta-glucans are another immune-boosting compound found within Turkey Tail. These sugars, common in all mushrooms, are the sought after ingredient for their medicinal qualities, helping to regulate blood sugar, lowering LDL cholesterol, and immune support.

Suggested Use:
As a dietary supplement, take 2 leveled scoops(~1000 mg). Taken once daily, or as directed by a qualified health professional.

MSRP:
Now: $199.00 - $895.50
Was:
What Are Shiitake Mushrooms? Native to East Asia, Shiitake mushrooms grow in Japan, China, Indonesia, and Taiwan. The fungus is used in both the culinary and medicinal capacity. While famous for its...

MSRP:
Now: $259.00 - $1,165.00
Was:
What is Maitake Mushroom Extract Powder? Grifola frondosa, commonly referred to as Maitake, is a polypore mushroom that grows in clusters at the base of oak trees [1]. The fungus is known among...