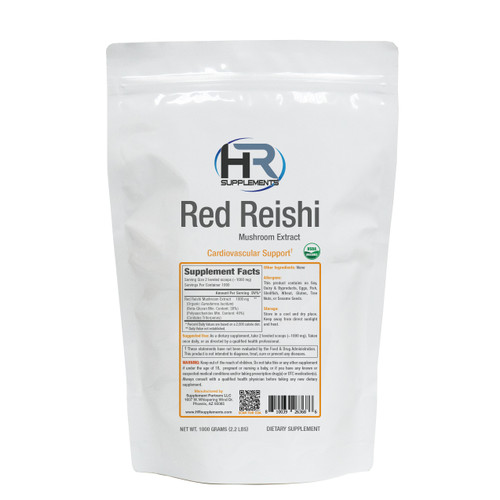 What is Red Reishi Mushroom Extract?

Known as a polypore mushroom that belongs to the genusGanoderma, Red Reishi is a red-varnished colored mushroom with a kidney-shaped cap, giving it a uniqueappearance. When the mushroom is fresh, it is soft, cork-like, and flat in appearance. Unlike many other fungi, it does not contain gills on its underside and instead releases its spores through its delicate pores. The pores underneath the mushroom may be white or brown, depending on its age. Traditional Chinese medicine uses Lingzhi mushroom. In nature, Red Reishi grows at the base and stumps of deciduous trees such as oak trees, but it is seemingly fond of maple trees. Only 0.02-0.03% of deciduous trees will possess lingzhi growth, therefore presenting a scarcity of appearance in the wild. This percentage indicates growth on 2-3 trees of 10,000. Today, the Lingzhi mushroom is actively cultivated on hardwood logs or sawdust/woodchips, due to the rarity of its appearance in the wild. It has been commercially manufactured since the 1970s. After the mushroom has developed its fruiting body, it is then harvested, dried, ground, and processed into tablets or capsules for consumption via a manner of methods such as in teas or soups. Other products extracted from lingzhi include processed fungal mycelia or spores.

How Does Red Reishi | Linghizi Work?
The Reishi mushroom has been and continues to be an active component in Eastern medicine and has shown that it may be a viable candidate for boosting the immune system, promoting healthy blood pressure, as well as promoting general wellness. Red Reishi helps with immune system support through increasing the activity of white blood cells while the beta-glucans in the mushroom have been shown to aid in facilitating a healthy immune system. Due to Reishi being an adaptogen, it is used to relieve stress.

How to Use & Recommended Dosage:
Because of its bitter taste, fresh lingzhi is traditionally prepared with hot tea or in a soup. Thinly sliced or pulverized lingzhi is added to boiling water, which is then reduced to a simmer, covered, and left for 2 hours. The resulting liquid is dark and relatively bitter. The red lingzhi is often more bitter tasting than the black. The process is sometimes repeated to increase concentration. Alternatively, the mushroom is used as an ingredient in a formula decoction or used to make an extract (in liquid, capsule, or powder form). The more active red types of lingzhi are far too bitter tasting to be consumed in a soup.
The recommended dosage of Red Reishi is 500mg to 1000mg per day, which is roughly the equivalent of 2 to 3 capsules. At this dose, a 180 count bottle will last you 60 to 90 days.

Suggested Use:
As a dietary supplement, take 2 leveled scoops (~1000 mg). Taken once daily, or as directed by a qualified health professional.

MSRP:
Now: $229.00 - $1,030.50
Was:
What is Wolporia Extensa Mushroom? Wolfiporia extensa is a fungus in the family Polyporaceae. It is a wood-decay fungus but has a subterranean growth habit. It is...