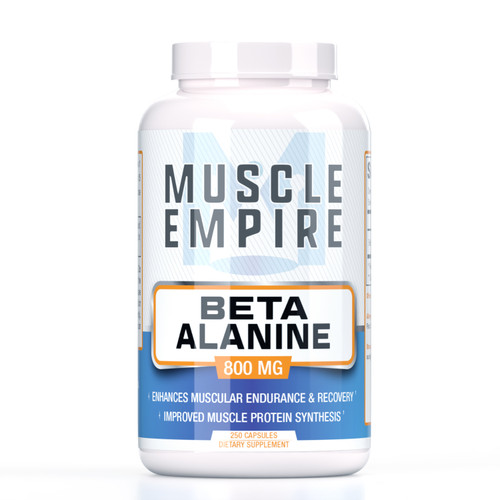 Beta-Alanine Benefits may include:

How Does Beta-Alanine Work?
Supplementing Beta-Alanine is believed to increase and store carnosine in skeletal muscles, helping to reduce acid levels within said muscles, then decreasing fatigue during exercise. Carnosine itself is a dipeptide; high amounts are commonly found in skeletal muscles and in both the brain and the heart muscle. The increase of carnosine through beta-alanine in the cells may protect against diet-induced drops of pH (which occurs from ketone production in ketosis), while also protecting the body from exercise-induced lactic acid production. During exercise, carnosine activates the process of Glycolysis, the process where glucose breaks down. The glucose that has broken down then turns into lactic acid, which subsequently produces hydrogen ions. This lactic acid production then causes muscles to become more acidic due to the hydrogen ions reducing the pH level in muscles. The onset of muscle fatigue begins as the acidity blocks the breakdown of glucose, which inhibits the muscle's ability to contract. Beta-Alanine works with carnosine to buffer against the lactic acid created as a result of Glycolysis.

Suggested Use:
As a dietary supplement, take one serving (1 capsule), 1 - 2 times daily, once 15-30 minutes prior to exercise and again immediately after exercise.

Storage:
Store in a cool, dry place. Re-seal bottle immediately after use to preserve freshness.

MSRP:
Now: $32.49 - $54.95
Was:
What is Muscle Empire's Beta-Ecdysterone? Beta-Ecdysterone, also called 20-hydroxyecdysone, is the active principle in several plants, including Rhaponticum carthamoides, or Maral root, Suma,...

MSRP:
Now: $36.95
Was:
What is Muscle Empire's Beta-Ecdysterone?Beta-Ecdysterone, also called 20-hydroxyecdysone, is the active principle in several plants, including Rhaponticum carthamoides, or Maral root, Suma,...

MSRP:
Now: $18.49 - $25.99
Was:
What is BCAA 2:1:1 Instantized Powder?Branched-Chain Amino Acids, better known as BCAAs, are a set of three essential amino acids, Leucine, Isoleucine, and Valine. Amino acids are the building blocks...