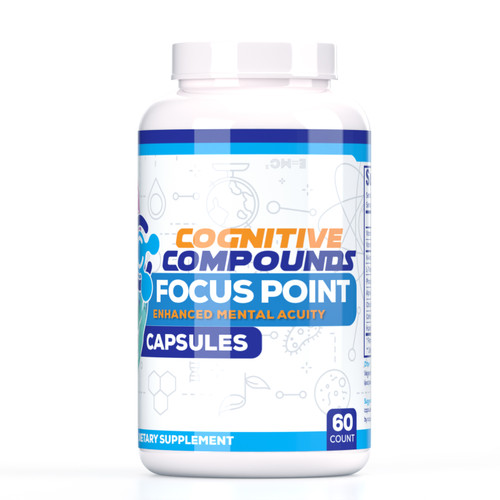 What Are Focus Point Capsules?
Focus Point is a comprehensive formula that contains Phosphatidylserine, Huperzine-A, N-Acetyl L-Tyrosine, also known as NALT, Alpha-GPC, Citicoline, Caffeine, L-Theanine, and a Vitamin B complex. These ingredients are chosen for their ability to operate together in a synergistic manner that promotes mental alertness, improved energy, and overall cognitive function.

Phosphatidylserine(PS) is a phospholipid that is a significant component of cell membranes, making it a highly valuable nutrient for enhancing cognitive function. Without sufficient levels of PS, brain cells do not transmit nerve impulses properly. Studies have also demonstrated it may be useful for combating exercise-induced stress and prevent the physiological deterioration accompanied by overtraining. In its relation to healthy sleep, phosphatidylserine may assist in the deduction of cortisol production in the body, allowing unhealthy levels of cortisol to decrease resulting in more restful sleep.†

Huperzine-A is a compound originally extracted from the Chinese club moss plant and is isolated and highly purified. Huperzine-A is commonly taken to assist in memory and cognitive function through increased production of acetylcholine, a compound that our nerves use to communicate in the brain, muscles and other areas. As an antioxidant huperzine may also assist preventing cell degradation.†

Alpha-GPC is a natural choline compound that is found in the brain, it differs from typical choline supplementation as it provides better bio availability for delivery of Choline. It is able to more readily cross the blood-brain barrier and is a biosynthetic precursor of acetyl-choline neurotransmitter. Alpha-GPC is considered to be the best source of Choline as a nootropic and it functions by increasing the amount of available Choline, which naturally converts to and influences the production of acetyl-choline. Acetylcholine is a powerful neurotransmitter that is responsible for learning, memory, and other important cognitive functions. Alpha-GPC is considered a nootropic dietary supplement that has been shown to enhance memory and cognition.†

Citicoline is a nootropic supplement also known as CDP-Choline or cytidine 5'-diphosphocholine. Citicoline is a naturally occurring compounds found in the cells of our body. Citicoline is made from Cytidine and Choline, bound via two phosphate groups. The present of cytidine and choline together allows it to be converted into uridine which supports the acetylcholine and phospholipid metabolism. Phospholipids are essential to the creation of cell membranes and support adequate function in cells. The mechanisms behind Citicoline may support improvements in attention, brain metabolism, and memory.†

Caffeine is produced in many forms, synthetically and derived form natural sources such as coffee bean, tea leaves, kola nut to name a few. Caffeine is the most common legal psychoactive compound in use. Caffeine can assist in a increase in mental alertness†

L-Theanine is an amino acid commonly found and derived from Green Tea leaves. This amino acid has shown to help with alertness, promoting calming & soothing effects, and blocking the excess binding of Glutamic Acid to Glutamate receptors in the brain. It has been shown to have similar effects to caffeine without the negative effects of jitteriness, anxiety, or drowsiness. It is commonly used with Caffeine due to synergistic effects all while promoting alertness, focus, and calmness.†

Vitamin B both B6 (Pyridoxine) & B12 (Cyanocobalamin) and building blocks of a healthy body. They have a direct impact on energy levels, cognitive function, and cell metabolism.†

Consider This:
Consider pairing Focus Point Capsules with our Mushroom Extract capsules for more a potential increase in both mental acuity and memory support.

Suggested Use:
As a dietary supplement, take 2 capsules up to twice daily or as recommended by a qualified health professional.

Storage:
Store in a cool, dry place. Re-seal bottle immediately after use to preserve freshness.

MSRP:
Now: $24.99 - $49.95
Was:
What is the Mushroom Complex?The Harvest Naturals Mushroom Complex is a comprehensive blend of eleven different mushroom extracts designed to provide all the benefits associated with mushroom...

MSRP:
Now: $19.99
Was:
What is Acetyl L-Carnitine (ALCAR)?ALCAR also has superior bioavailability over normal L-carnitine and costs considerably more to manufacture. It is the attached acetyl group that makes ALCAR a...

MSRP:
Now: $24.99 - $44.99
Was:
What is Choline Complex?Cognitive Compound's Choline Complex + DMAE is the fantastic combination of three potent choline compounds to support memory, cognition, attention, and improving the natural...

MSRP:
Now: $20.99
Was:
What are Phenylethylamine Capsules?Phenylethylamine is a chemical naturally found in the body and also in chocolate. It is a powerful neurotransmitter and neuro-regulator that may play a role in...